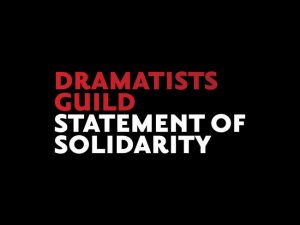 The recent murders in Atlanta of eight people, six of them Asian American women, at the hands of a white supremacist is the latest horrific example of the cancer of anti-Asian racism in America.

We know, as writers, that narrative is a powerful tool that can be used for good or ill. It can illuminate lasting truths that ennoble us all, and it can also denigrate, diminish, stereotype, and scapegoat. These most recent attacks cannot be disconnected from the particular and pernicious mix of misogyny, sexual fetishization, and racism twined into cultural narratives that have been used throughout our nation’s history to justify discrimination and violence against Asian people.

These acts affect us. They affect our membership. What sets race and gender based violence apart from other acts of violence is the powerful message of intimidation it sends to everyone in the targeted group. It’s a message felt by many in our community, and one we can push back against through solidarity. We urge all writers to join us in supporting, standing up, and speaking out against anti-Asian American hatred and violence.

Below are additional resources for those in need of support, as well as information about how to take action.

The Steven Schwartzberg Grants for Mental Health and Wellness

How To Report Hate Crimes

A Literary Guide To Combat Anti-Asian Racism in America

The Dramatists Guild of America

With the Support of

In May 1963, Robert F. Kennedy met with a small group of Black artists and activists, including Dramatists Guild members James Baldwin and Lorraine Hansberry. When Kennedy seemed unable to comprehend the pain of Jerome Smith, who had been beaten and jailed by the police, Hansberry reportedly said, “if you are insensitive to this, then there is no alternative except our going into the streets…and chaos.”

It has been 57 years since Lorraine Hansberry walked out of that meeting, and systemic racism remains pervasive throughout American society. The brutal murder of George Floyd, by Minneapolis police officer Derek Chauvin, is the latest atrocity in a history of oppression spanning four hundred years. Rage has become the only rational response. As Hansberry said to Kennedy, “We would like, from you, a moral commitment.” We call on every American to make a personal commitment to immediate change.

As writers, we express solidarity with our colleagues in the press, who place themselves at risk to keep us informed. In an era of endless spin, the devolution of truth, and the demonization of science, journalistic freedom is among our most essential values.

We passionately affirm our commitment to amplify and protect the voices of Black writers. We honor the legacy of Baldwin and Hansberry, and support the next generation of Guild members. We will continue to work with writers to build theatrical responses to their communities’ needs.

Musical genres such as blues, jazz, rock-n-roll, r&b, and hip-hop, created by African Americans, fuel the musicals which keep Broadway alive and grace the stage of every theatre and school in America. Plays written by African Americans have deepened our understanding of the human experience and expanded the canon of literature’s most celebrated works. Without Black people, and their constant creation of imaginative and exciting art forms, the American theatre as we know it could not exist.

We strongly condemn leadership that refuses to address the overwhelming pain of its citizenry, that meets civic protest with violence, and that fails to ennoble us and inspire us during a very dark time. We need to be reminded of our nation’s common purpose: to provide freedom and equality to all of its people.

The Dramatists Guild of America

With the Support of

Stay on top of grant applications, new content, donor opportunities and more by signing up for our newsletter.
[gravityform id="1" title="false" description="false" ajax="true"]