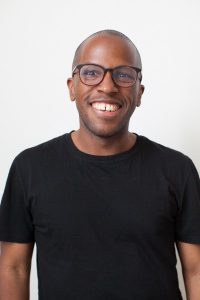 What was your first experience with Theater?

My first experience of theater was technically at church, where people were always performing themselves in the most peculiar ways through the Instagram-like filter of blackness and Christianity. My first experience of “legitimate” theater was in the Paper Bag Productions children’s theater in Detroit, Michigan where I had four of my lines cut to two in our production of Snoopy.

When did you start writing?

I’ve been writing since I was about 10 years old. Once I recognized that I’d never be Denzel Washington, I quit acting and started trying to imitate Jackie Collins and Stephen King. I fell into playwriting and musical theater writing completely by accident.

Where does your inspiration come from?

My inspiration comes from questions I can’t answer in the immediate world around me; usually there’s some issue that I have a feeling about that’s a little out of focus and writing is the process that helps me bring clarity to the issue. I often look to language and the things I overhear people say for inspiration. Sometimes and image will stick with me and suggest a story or a song.

What are you most looking forward to as a Fellow?

I am looking forward to getting to spend time with a room that is both musical theater writers and playwrights. As someone who doesn’t separate musical theater from plays, I think it will be tremendously helpful to get the feedback of those who do not use song to push story forward. I hope to finish a draft of a wild piece I’ve had the inclination but not the time to finish for a while now. I hope to learn more about using my music to tell a story dramatically given that I probably lean more toward straight songwriting albeit with an eye toward story.

What do you find most rewarding about being a dramatist?

I find it most rewarding when you find clarity in what message that you’re trying to impart to an audience and it clicks and resonates. While I’m a fan of ambiguity, in recent years, I’ve become very focused on ensuring that I say what I mean in my work and not being afraid to express a strong POV, particularly as we grapple with issues of “diversity” in musical theater.

Michael R. Jackson holds a BFA and MFA in playwriting and Musical Theatre Writing from the NYU Tisch School of the Arts. As a songwriter, he has seen his work performed at NAMT, The 24 Hour Musicals, The Barrington Stage Company, Merkin Hall, The Laurie Beechman Theater, Feinstein’s/54 Below, The Triad, Ars Nova, Joe’s Pub, The Metropolitan Room, The Bruno Walter Library, and ACT in Seattle. He wrote book, music, and lyrics for the musical A Strange Loop. He wrote book and lyrics for the musical Only Children with composer Rachel Peters, book and lyrics for the musical adaptation of the 2007 horror film Teeth with composer and co-bookwriter Anna Jacobs, and is currently writing book for the musical U.G.L.Y with composer-lyricist Darius Smith. He is an alum of the Johnny Mercer Writers Colony, the Ars Nova Uncharted Writers Group, and is a Sundance Theatre Institute Composer Fellow. He is Jonathan Larson Award 2016 Finalist and is a 2016–2017 Dramatists Guild Fellow