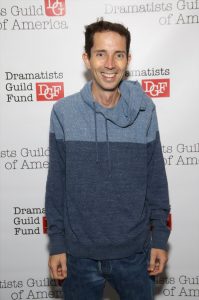 What was your first experience with Theater?

I had a bit part in a production of Rip Van Winkle at Villanova Theatre when I was five. My father was a theatre professor and was directing. There was a root beer keg and free peanuts on stage. Think it’s still my theatrical high point.

When did you recognize you were a writer? Or when did you start writing?

I began writing plays because my big sister made me. I was single and lived and worked at Access Theater, a small black box theatre my sister founded in TriBeCa. She told me late one Friday night that she needed me to write a short play by the end of the weekend for a night of one-acts she was programming. I fumbled my way through three drafts through a highly caffeinated weekend and got her something by Sunday night. I was shocked by how much I enjoyed the process. That particular scene came quickly and more or less fully formed. The characters surprised me and made me laugh. The production went well and the play went on to win the Actors Theatre of Louisville’s Heideman Award for best short play.

Where does your inspiration come from?

Hm. Is it a copout to say life? Because really that’s what it is. I see things or hear things and they trigger something. It could be an emotion, a line of dialogue, an idea, a set piece. Whatever it is the thing sort of hangs about you like a mild virus, mutating weirdly over time. And eventually you have something you want to shape into a play.

What are you most looking forward to as a fellow?

What do you find most rewarding about being a dramatist?

Productions. The rehearsal process of the first production of a play is where the action is for me. It’s the fact that you’ve got all these people working to understand and bring to life this vision you had; to see all the machinery and technical work being done; and to have the anticipation of seeing this thing to life in front of an audience. It’s sort of like a father anticipating the birth of a child. His work is done and he won’t have to get his hands dirty, but he’s going to share in this magical moment.