Enjoy the final edition of the 2018/2019 Fellows Spotlight series, as we present Zack Zadek! 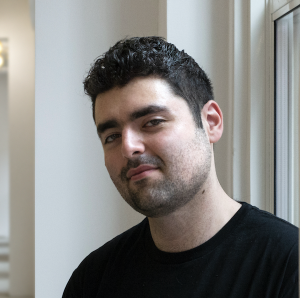 When I was a kid, I was obsessed with two VHS tapes: The Sound of Music, and Mary Poppins (I was also  with a cassette tape of the Original Broadway Cast Recording of Fiddler on The Roof).  I started getting in trouble around first or second grade for singing disruptively during the school day (not kidding), so my parents and teachers had a conference to figure out a musical outlet to address the problem.  That led to me auditioning for the local JCC production of The Wizard of Oz (I played a munchkin, naturally) and the lifelong love affair with musical theatre was solidified.

I should mention that I really became a “theatre kid” for the rest of my childhood/teenage years – I spent hours my library organizing cast recordings, went to theatre camp, played through the scores of all of my favorite musicals on the piano.  I was that guy in my school who was like, the hardcore theatre kid amongst the just normal theatre kids.

When did you decide to become a writer?

I was always making up my own stories as a kid, and wrote a bunch of terrible short stories growing up.  I also wrote a bunch of slightly less terrible songs instead of practicing classical piano, which was what my very strict teacher wanted from me.   Sometime before high school, it clicked that Guys and Dolls and Fiddler didn’t just descend from the heavens, that they were written by actual people – and from that moment on, I knew I had to be a musical theatre writer.  Sometime after that, my friends and I staged an evening of my work in someones backyard during the summer.  It poured and all the equipment got ruined.  I was hooked.

Is there a writer, show, or piece of writing that was particularly influential on your path?

I would say there were a few pieces of writing that were that formative for me.

The first would probably be Spring Awakening – I remember seeing it right after it opened on Broadway which was at the very beginning of my own adolescence , and I had this electric sensation in seeing a show that felt so immediately relatable to my own life in a theatre like that.  And the bigger takeaway was that music that felt so deeply contemporary in a true sense of the word could be used to tell an emotional story in a theatre.  Not like faux-contemporary.  This was music that was f**cking cool.  I went back several times.

The work of Jason Robert Brown was very influential for me, as it was/is for many writers of my generation – I was a pianist first growing up, so the way that he approached the piano definitely changed how I thought about my own instrument.  And I effectively did a “close reading” of his work over those early years – so as I grew in my own understanding of craft, it rewarded that with layers of hyper-specific character writing in the lyrics, and just as powerfully, a deep sense of dramaturgy in the music.

But bar none, the most important piece of writing for me was LOST (yes, the TV show).  I started watching LOST sort of casually at the recommendation of a friend, and it quickly became not casual at all.  I would listen to a podcast with the showrunners religiously after every episode, dissecting the latest turns – and by the time I caught up to Season Three, I realized this was the exact kind of storytelling I wanted to do.  All of Damon Lindelof’s work has become that impactful for me, but LOST is very much a reason I’m a writer.

In general, I think I’m really interested in exploring the “big questions” in my work- Why are we here?  What does it mean to be alive?  How do we figure out our place in the Universe?  It sounds pretentious, but those are very much the things (and fears) I’m interested in exploring in my writing.  More specifically, I often use high concept worlds as a lens against very small character beats to look at some of those aspects of the human condition.

Musically I am a strong proponent of the idea that “musical theatre” is a medium and not a genre, and I always want the scores of my shows to have a unified sound, to be in conversation with the music of our time, and to be hooky.

I want to write musicals that a person walking off the street who thinks musicals all sound lame might think is cool (but also, screw that guy).

I, regrettably, cannot.  It’s kind of secret.  All I’ll share is that it’s a commission for Ars Nova and Jill Furman, and that I’m ridiculously excited about it.

I get to tell stories in a medium that is the ultimate synthesis of so many disparate forms  – I get to engage with music on a deep level, and story structure, and character writing, and lyric craft – all while writing about the ideas and interests that would preoccupy me all day anyway.

And then when it’s all said and done, I get to stop being all alone in it – and pass it off to a whole group of talented artists who start bringing it to life, and teaching me about a thing that I made, and create a communal experience – that we hopefully get to share with an audience of actual human beings.

Could there be anything better?