Fellows Spotlight is our summer blog series that invites you to take a behind-the-scenes look at our Fellows program.

Last week we introduced the series with a spotlight on Kit Yan and Melissa Li.

This week, we are thrilled to introduce you to Rae Binstock. 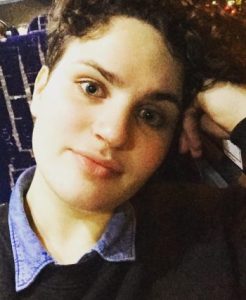 This is the experience that immediately comes to mind, though it was far from my first. Growing up in Cambridge, MA, my parents started taking me to shows at the American Repertory Theater when I was very very young. (Potentially too young, but I’d say it all worked out.) One of those plays was The Birthday Party by Harold Pinter. I was around 10 years old. I had never seen Pinter before, and my father didn’t give me any context before the show started (he never did). I just remember the feeling in my stomach while I watched that play, like the first drop on a rollercoaster stretched out over two hours. I understood so little of it but I was transported by the sheer theatricality. It was that moment of realization that theater is nothing like anything else. It’s not movies, it’s not TV, it’s not reading, it’s not an exciting conversation. It’s an alchemical reaction in real time that happens to and with you, and as a child I remember being utterly obsessed with the how and why of that experience.

My father is a novelist. He raised my sister and I to love first reading and then writing. I must have started at least fifty “novels” as a kid, but I never quite knew how to finish them. I was always so scared of “messing it up.” My mother, on the other hand, works in homeless housing, and she raised my sister and I to value planning and action over easily-exhausted fervor. I knew there was something to writing that made me feel strong and capable, but I couldn’t find it in the density of prose. When I got to high school, I was already a theater kid, but the tipping point was reading Angels in America. You know that feeling when you return to your childhood home as an adult and notice something – a room, a window, even a lamp – that had been there the whole time but never registered in the specifics of what you considered your habitat? That’s what it felt like reading Angels. Everything I knew suddenly appeared a little off, a little sudden and unexpected, because I had been presented with an entirely new way of thinking and talking about them. The language and scope of that play connected me with the power that I had been trying to find in writing since I was a little kid. I’ve never looked back.

My work is about tension between the identity and the individual. Every society requires the people within to sort themselves into different groups, if only for the sake of organization. That “sorting” is the source of some of humanity’s worst tendencies, but the solidarity within the sorted groups is the source of some of our best tendencies. I have found in my own life that the more people rely on their category, the more strength they derive from it and the more fear they have of any threat to it. My plays explore the inevitable struggle that everyone faces when forced to confront their “sorting.” Race, class, gender, sexuality, ability, education – we are all eager to be defined in some way, but we are also borne out of molds with infinitely undefined shape. I write to try and, if not solve, then make peace with some of that contradiction.

That Heaven’s Vault Should Crack is a cycle of five short plays that reimagine stories from the Bible and the Qu’ran in terms of modern-day climate change. Each play transports a narrative like Noah’s Ark or the Crucifixion to the present day and overlays the moral lessons and strictures onto our seemingly more complicated modern system. I find myself fascinated by how resistant the human race is to the idea of climate change, despite how readily and deeply most of us ascribe to the idea of divine forces governing our reality. I think the two of them have to have something in common, and that we can only handle one of them at the time.

I talk a lot. My plays have a lot of words. Beyond anything, I treasure the moments I can create in a play where silence makes more of an impact than words ever will.