Fellows Spotlight is our summer blog series that invites you to take a behind-the-scenes look at our Fellows program.

This week, we are thrilled to introduce you to Mathilde Dratwa. 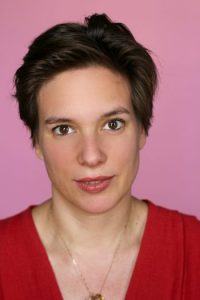 When I was a teenager, I was cast as Juliet in the school play. I had to wear an off-white flapper dress – because obviously Juliet wears white. (I now know that this is a fundamental misunderstanding of the character: she’s a spunky teenager who makes the first move and can’t wait to get laid! She is thirteen and she is unafraid to lust and she dares to disappoint her parents and she would have had so much to teach me if only I had known then how to listen.)

Anyone who menstruates will tell you that there is no other way; if a director makes you wear a light-colored costume you will inevitably be on your period on performance night, this is a given. So I was on stage wearing a sanitary pad and a tampon beneath the off-white flapper dress, just in case. I remember my mother explaining the anatomy of my body through a closed door earlier in the day: push it back, not straight up, and trying her best to convince me that an applicator would make this whole endeavor so much easier. The good news is that at the end of the play I cried real tears — thank you, teenage hormones.

After the show I remember the curtain call: holding hands with other students in other grades that I would otherwise not know. I did not know to smile; my mother, watching anxiously from the audience, was worried that something was wrong. But nothing was wrong; this all felt wonderfully Serious and Important. People were clapping! For us! (“For me,” I remember thinking, because I was young and self-centered and also a little bit correct, and because the world hadn’t yet taught me that a woman – a girl! – shouldn’t think that way. In the car, on the way home, horror of horrors, I think I said it aloud, to my mother, with glee: “everyone clapped – for me!” and I think I remember that my mother nodded, because she was, indeed, clapping for me.)

I tried really hard not to become a writer. I tried really hard to become an actress. I didn’t write, because I knew, deep down, that I’d be better at writing than I was at acting; I feared that once I started, writing would become my focus. But one day, I met the wonderful Mary Bacon, who invited me to join a group she’d created with Heidi Armbruster: Dorset Theater Festival’s Women Artists Writing group. It consists of female-identifying actresses who also write. That was my gateway drug; I felt like I could write among actresses… Pretty soon, I was hooked, and I haven’t looked back (or auditioned) since.

Can you tell us a little bit about the show you’ve been developing as a Fellow?

A Play about David Mamet Writing a Play about Harvey Weinstein. It’s basically what it sounds like. And also, not at all.

It’s really a play about women. About Francesca. About Francine, who can do it all (parent, act, sing, fly, castrate, kill)… until she can’t. About Zoe, who shows up to audition and can’t stop talking.

Turns out there’s a lot to say.

I like writing roles that I think my actor friends would love to play. And making people laugh despite themselves.