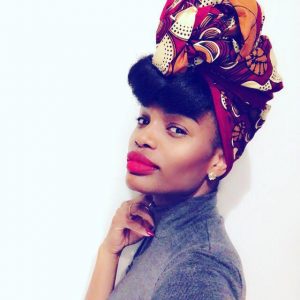 I cannot remember exactly, if we’re talking about theater in the traditional sense. The most accurate answer, however, is my Black Baptist church on the westside of Chicago, five blocks from Fred Hampton’s home (where he was murdered by CPD). This was the sociopolitical backdrop of the folk sermons emphatically delivered behind the sacred pulpit-turned-stage. I was enthralled by the deeply rooted Black liturgies, the stained-glass windows, holy ghost choreography and pentecostal breathing–the theatricality of that which was holy ground.

The first time I remember seeing Black people in a professional production was sophomore year of high school at Goodman Theater’s production of Radio Gold by August Wilson. My American Literature class took a field trip to see the production after reading the play. I remember being amazed and wanting more of Mame Wilks, because Black women’s stories were more complex and under-explored, even then.

I was always a writer. Language was the most natural and challenging way to undermine systems of oppression. I was trying to understand the world I was in and write my way into something else, something freer. In middle school, I encountered Nikki Giovanni’s poem “Ego Tripping (there may be a reason why)” and was enthralled by the speaker’s brash celebration of herself. I went to the library and checked out every book Giovanni had published at the time. I read them from cover to cover, but found myself most drawn to Black Feeling, Black Talk/ Black Judgement. Giovanni was unapologetically Black and female, fierce in her language and her critique of our political landscape. If Giovanni could do that just with words, I wanted to wield, wound and revive words like that. Then I was introduced to my literary mother, Ntozake Shange, and I quickly learned the importance of rupturing language and bending it to my will. I was a poet first. I studied Gwendolyn Brooks, Lucille Clifton, June Jordan, Sonia Sanchez, Audre Lorde, Alice Walker, Nikky Finney, Patricia Smith, Elizabeth Alexander, Krista Franklin and way too many white women poets (whom I won’t name because their names are overstated and I want to give deliberate space to the Black women who are the reason I am possible). And when poems proved too small a form for the stories I wanted to tell, I (re)turned to the work of Zora Neale Hurston, Toni Morrison, Octavia Butler, Toni Cade Bambara, Saidiya Hartman and Alexis Pauline Gumbs. But I wanted to create experiences about Black women with audiences in a live environment. So I looked back to Shange, early Suzan-Lori Parks and Katori Hall. Because my people’s work & resistance have never been safely historical, theatre serves as a literary and live documentation of how Blk womyn practice sci-fi living. t’s is intimate, unflinchingly honest (when done right), and real time immediacy calls us to create a moment together; to witness and be witnessed.

As an interdisciplinary theatremaker, my work converges literary, visual and musical worlds. I investigate, dismantle, critique and reconstruct mass media images of iconic, commonplace and invisibilized figures within the African Diaspora. My thematic obsessions deliberately center Black women’s land legacies, stored body knowledge of ancestral memory, girlhood trauma, maternal bonds, ritual, religion and distinct experiences of environmental racism. These themes point toward my central fixation: Black women’s literal and figurative dismemberment and corporeal restitution as a means of belonging–to ourselves, our families, dominant culture and our world. Afrosurrealism, magic realism, narrative re/memory and emergent strategy are conceptual preoccupations of my work. Through my artistic practice, I aim to resist Black feminine erasure and endeavor to re/imagine a world where a kaleidoscope of Black womanhood is lavishly welcomed and affirmed. Currently, the body of work I’m creating requires casts exclusively Black women and Black women directors.

During my time as DGF Fellow, I’ve been working on shadow/land and [hieroglyph]. These plays are the first two works in my 10-play Katrina Cycle, focused on the effects of Hurricane Katrina & its state-sanctioned man-made disaster. Taking up epic space, these plays traverse the Black Katrina diaspora in an examination of the ongoing effects of displacement rippling in & beyond New Orleans. Together, the ten works underscore colonialism, environmental racism & the erasure of Black land legacies through the distress of disaster, evacuation, displacement & urban renewal.

I am most grateful for how my writing operates as cultural work. I get to practice the notion of sci-fi living: using my radical imagination to do what has never been done before in theatre as a means of advancing a more just and compassionate world and write toward a future in which Black people exist and are free.