We are thrilled to present Charles Gershman! 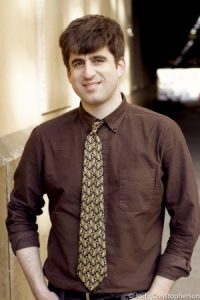 When I was young, my parents regularly took me and my siblings to The Muny, a huge open-air theater in Forest Park, the big city park in St. Louis. I remember seeing Peter Pan, Gypsy, and South Pacific. It was so exciting seeing Peter Pan fly! And I can still vividly see Gypsy Rose Lee’s boobs being lit up with electric lights and it felt so naughty and wrong and great, and I think that was the closest I’ve ever come to being straight.

A few years ago Tina Howe invited me to join her MFA playwriting class at Hunter College. She had us read Joseph Campbell’s Hero With A Thousand Facesand Carl Jung’s autobiography and Diana Son’s extraordinary Stop Kiss. She took us to see plays and introduced us to people like John Patrick Shanley and Chuck Mee. I remember sitting alone with her in her apartment going over a new first draft I’d written. She told me to rewrite almost the whole thing. I was keeping my characters on too tight a leash. “Write in bold primary colors!” I finished that year understanding that being a playwright would take a lot of work and commitment. It’s because of her that I made the commitment.

A number of my plays are queer-themed. I wrote a play last year called Free & Proud, which is a spare two-hander that captures the entirety of a relationship between two men, a white American and a black Nigerian. It was published by Oberon Books in concert with a UK production, and it recently won the Chesley/Bumbalo Playwriting Award. But my work varies a lot. I’m also working on a monologue-based solo piece called IvankaPlay, which imagines Ivanka Trump breaking the pattern and acting on her better impulses, and exploring what it would take for her to actually become heroic.

I’ve been working on a play called Stopover, about a gay married couple who take in a foster teen. The two dads come from different backgrounds and parenting cultures, and the play looks at why we become parents and what we’re really in it for. I wrote this play because I am terrified atthe idea of being a parent and wanted to explore that fear. It’s been a challenging and gratifying play to write.

There are some really rewarding solitary moments—when you suddenly break through some wall in the story that’s been a source of agony, or when some new thrilling idea hits you and it feels like a flash of brilliance and you can only see the good in it. But the most rewarding moments are when the work speaks to people—and they tell me so. That says to me that there’s maybe something universal in the story, that it’s many people’s story, that maybe it has a good reason for being told.

Stay on top of grant applications, new content, donor opportunities and more by signing up for our newsletter.
[gravityform id="1" title="false" description="false" ajax="true"]